Notice: Trying to get property 'post_type' of non-object in /home/webadmin/websites/competitionpolicyinternational.com/releases/20190905/wp-includes/class-wp-query.php on line 4196

In this article, we put aside the question of whether there is any need to remedy digital platform competition and focus instead on the competition effects of interoperability. It is important to acknowledge at the outset that interoperability can be very beneficial. Interoperability is what allows different applications to communicate over the Internet. It is what enables users of different applications to share photos, videos, and documents and what allows iPhones to communicate with Android smartphones.

Overall, we urge caution in requiring interoperability for digital platforms, which may do far more harm than good.

To assess whether interoperability is the right policy for competition, it is important to consider both the benefits and costs of interoperability. The benefits vary across applications. One key determinant of the benefits of interoperability is the cost of multihoming. Interoperability may be particularly valuable when multihoming is expensive. For example, if Android smartphones could not communicate with iPhones, purchasing and carrying both an Android smartphone and an iPhone to be able to reach most users would be costly and inconvenient. Conversely, interoperability may offer users relatively little benefit if it is inexpensive to use different platforms to connect to different sets of users. For many types of digital platforms, users pay no fees or only pay per-use fees. For example, social media platforms normally do not charge user fees. Passengers only pay a per-use fee for ride-share platforms, making it inexpensive to switch platforms from ride to ride.

There are many examples of digital platforms where non-interoperability is the norm, including social media, messaging applications, digital marketplaces, online dating websites, teleconferencing systems, ride-share applications, credit cards, restaurant reservation websites, streaming services, job search engines, and classified advertisements. What these platforms have in common are low costs of multihoming and a relatively high degree of differentiation. The absence of interoperability for these digital platforms may reflect user preferences.

III. LIMITING THE SCOPE OF DIFFERENTIATION

Differentiation is an important element of competition. Firms differentiate themselves from competitors through products, services, advertising, quality, and pricing strategies.10 Differentiation enables firms to gain a competitive advantage in serving specific segments of consumers.11 Consumers benefit from differentiation by having options that are more targeted to their specific preferences.

The interoperability proposal from Kades and Scott Morton does not prohibit platforms from offering differentiated features to their users but requires the exchange of “basic” information between platforms.19 Under this proposal, interaction between users on the same platforms would have features not available for cross-platform interactions. The Kades and Scott Morton proposal would only offer a partial interoperability benefit and attenuated network effects across platforms. If multihoming costs are low (as they are for social media platforms), there may be relatively little demand by users for the type of interoperability that Kades and Scott Morton propose. With low multihoming costs, users may prefer to join a platform to engage with others on the same platform at a full level of functionality rather than engaging with others across platforms at a reduced level of functionality.

IV. LOSS OF COMPETITION AND INNOVATION

What makes competition between non-interoperable (or incompatible) platforms particularly intense is the presence of positive network externalities (or network effects). Under positive network externalities, increasing the size of the network makes the network more valuable to all of its users.20 Incompatible platforms have a strong incentive to compete for users because their network size is a source of competitive advantage.21 Because of network effects (and strong incentives to increase network size), a platform’s optimal strategy may be to charge zero prices or even subsidize usage in order to attract more users.22 Multi-sided platforms may be able to attract users by subsidizing usage on one side of the platform and earning revenues on the other side of the platform, for example, from advertisers on social media platforms or merchants on credit card platforms.23

Interoperability transforms the nature of platform competition from between-network to within-network.27 This transformation from between-network to within-network competition may have adverse effects.28 For example, under interoperability, social media platforms would still compete for users, but they may have diminished incentives to develop new content-creation tools because the benefits of that investment would partially accrue to other platforms.29

In determining whether mandatory interoperability is the right policy for digital platform competition, it is important for policy-makers to consider the costs of the standard setting process and whether the benefits of interoperability for digital platforms justify these costs.34 Standard setting organizations have the difficult task of building consensus among participants with divergent views and agendas.35 Negotiations among parties with divergent agendas may lead to delays in reaching agreement.36 The standard setting process also brings together competitors to participate in joint design decisions, which can create an opportunity for participants to engage in anticompetitive behavior (despite whatever mechanisms that standard setting organizations put in place to prevent such behavior).

Because of the uncertainty of technological progress and the challenges of reaching agreement among participants with divergent views and agendas, in some cases the standard setting process may result in inferior technological and design choices.37 Interoperability standards may also lead to excess inertia, where standards lag technological and design advancements.38 Standards may deter innovation and risk-taking because they represent design by consensus.39 Firms unencumbered by interoperability standards are free to experiment with new features and services, potentially leading to more innovation.

However, there are a number of reasons why tipping may not occur in digital platform markets. Markets may not tip when users have heterogeneous preferences and firms offer differentiated products and services.42 Users’ preferences for differentiation may outweigh their preferences for larger networks.43 Thus, multiple incompatible platforms may survive by providing differentiated products and services that cater to users’ specific preferences. Tipping may also not occur if multihoming costs are low. Users may be willing to join smaller networks that provide differentiated services and also use a large network if the cost of using multiple networks is low.44 Past examples of tipping include the adoption of the VHS standard for videocassette recorders and the QWERTY standard for typewriter keyboards.45 These cases involve relatively high costs of multihoming (purchase of hardware) and relatively low preferences for variety compared to the strength of network effects. In contrast to these cases, digital platforms tend to have relatively low costs of multihoming (no purchase of hardware), heterogeneous user preferences, and a high degree of differentiation. Based on these attributes, there is no reason to assume that digital platforms would be particularly prone to tipping.

There is also no evidence of widespread tipping among digital platforms. Katz and Shapiro define tipping as the “tendency of one system to pull away from its rivals in popularity once it has gained an initial edge.”46 We do not observe such a tendency among digital platforms at a systematic level. On the contrary, users have numerous platform options in social media, messaging systems, digital marketplaces, online dating, teleconferencing, ride-sharing, credit cards, restaurant reservation services, streaming services, job search engines, and classified advertisements. Many digital platforms are thriving despite being significantly smaller than the largest platform in their category.

The proposals for remedying competition through interoperability focus on social media platforms and on Facebook in particular. However, entry and growth of smaller social media platforms belie the notion of tipping toward Facebook. Note the recent success of TikTok. Also note that Twitter and Snapchat have recently achieved significantly higher growth rates than Facebook (in terms of the average number of daily users), even though both of them are significantly smaller than Facebook. These cases show that platforms can achieve high growth despite being much smaller than the leading platforms, contrary to the notion of tipping. Interoperability is not necessary for achieving meaningful competition among digital platforms. Instead, marketplace evidence suggests that entrants and smaller platforms can achieve success through innovation, risk-taking, differentiation, and high-quality services. 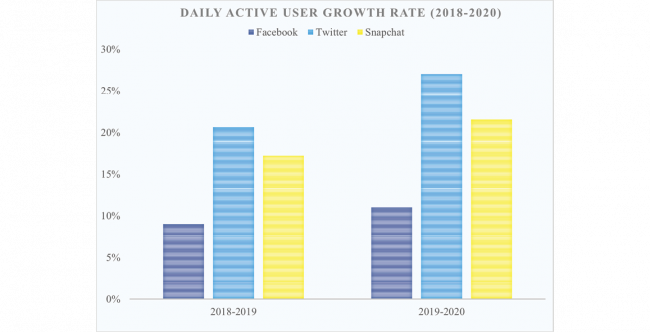 1 Jay Ezrielev is the Managing Principal at Elevecon and former economic advisor to FTC Chairman Joseph Simons. Genaro Marquez is Vice President at Elevecon. We are grateful to Yair Eilat for his comments.

2 Interoperability should be distinguished from data portability, which is the ability to transfer data between systems or applications.

18 The Rich Communication Services (RCS”) standard extends the functionality of the SMS and MMS standards. However, even though the RCS standard was first proposed in 2007, so far, there has been relatively little adoption of the standard by messaging applications. (See Mike Dano, “Verizon, AT&T, T-Mobile kill RCS plans,” LightReading, April 13, 2021, https://www.lightreading.com/ossbsscx/verizon-atandt-t-mobile-kill-rcs-plans/d/d-id/768729.

24 Cross-firm network effects may be attenuated to the extent that interoperability is only partial and if firms may retain features that are outside the scope of the interoperability standard.

44 Consumers would be willing to join a smaller network if the cost of membership is less than the differentiation benefit of the network. See Bruno Jullien & Wilfried Sand‐Zantman, “The Economics of Platforms: A Theory Guide for Competition Policy,” TSE Digital Center Policy Papers series, no. 1, September 24, 2019, https://ssrn.com/abstract=3502964.

US & Germany Work Together On Russia’s Nord Stream II Deal

You can find out more about which cookies we are using or switch them off in settings.

This website uses cookies so that we can provide you with the best user experience possible. Cookie information is stored in your browser and performs functions such as recognising you when you return to our website and helping our team to understand which sections of the website you find most interesting and useful.

Strictly Necessary Cookie should be enabled at all times so that we can save your preferences for cookie settings.

If you disable this cookie, we will not be able to save your preferences. This means that every time you visit this website you will need to enable or disable cookies again.